Picture Stories for Grown Up Kids

My mother did a great job of educating my younger brother Dub and me about people who are physically challenged. At a very early age I was taught to be considerate and not to “gawk” at those who were different because of some sort of bodily malady. 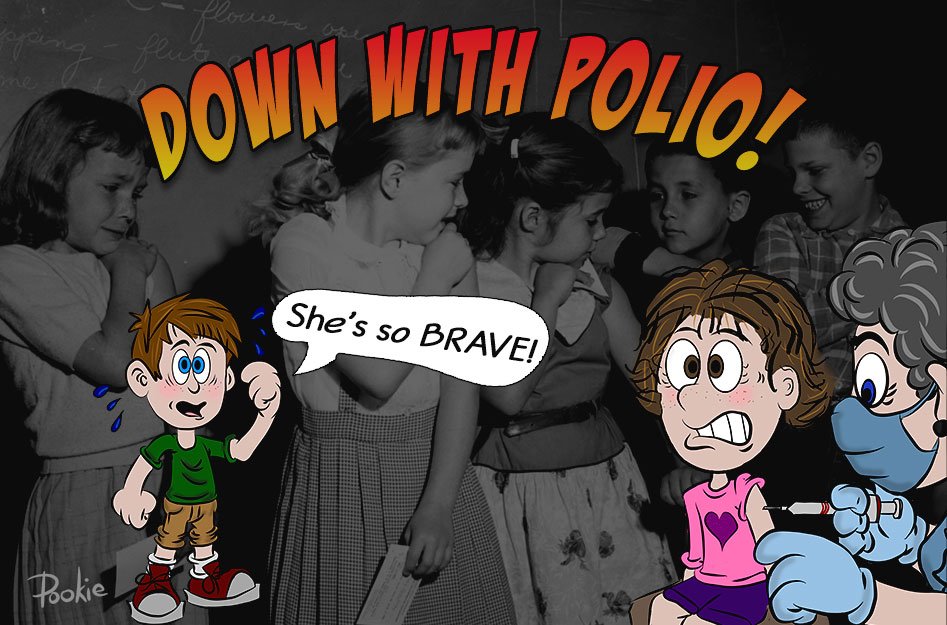 Growing up in the 60s I was very aware of kids who had cumbersome steel braces strapped upon their legs because they had been stricken with polio. 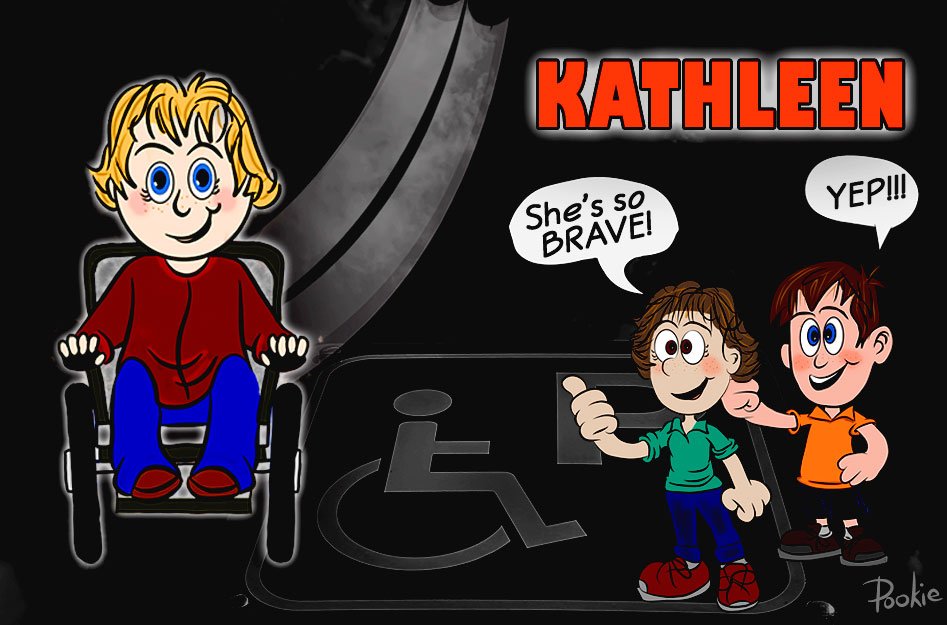 Kathleen, a good friend down the street, had juvenile rheumatoid arthritis and was in a wheelchair. I accepted these situations and tried my best to treat the kids as I would any other child I knew.

But, being a curious child I always grilled my mother about how these maladies occurred. 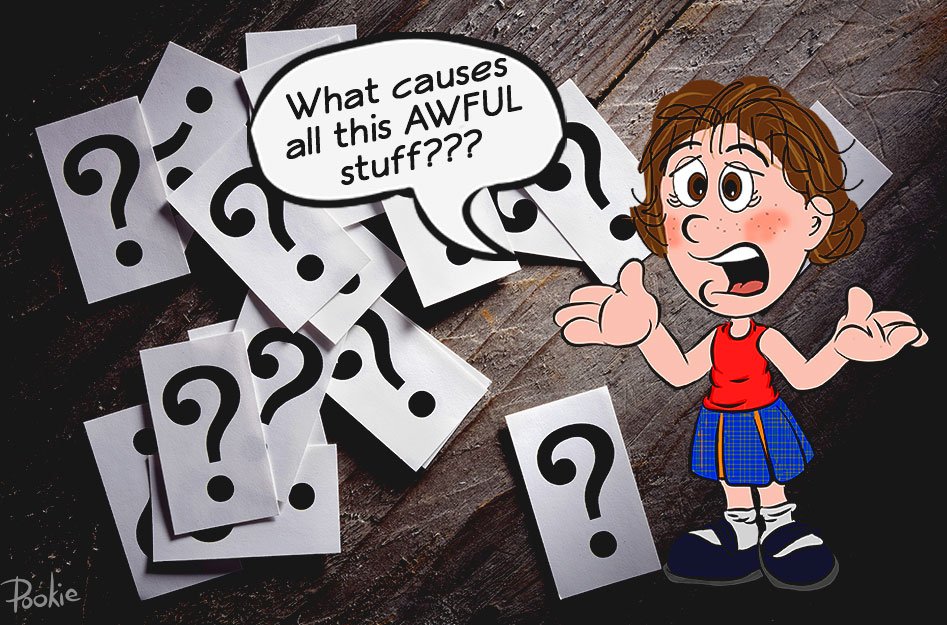 “How do you catch polio, Mama?”
“What caused Kathleen to get arthritis?” 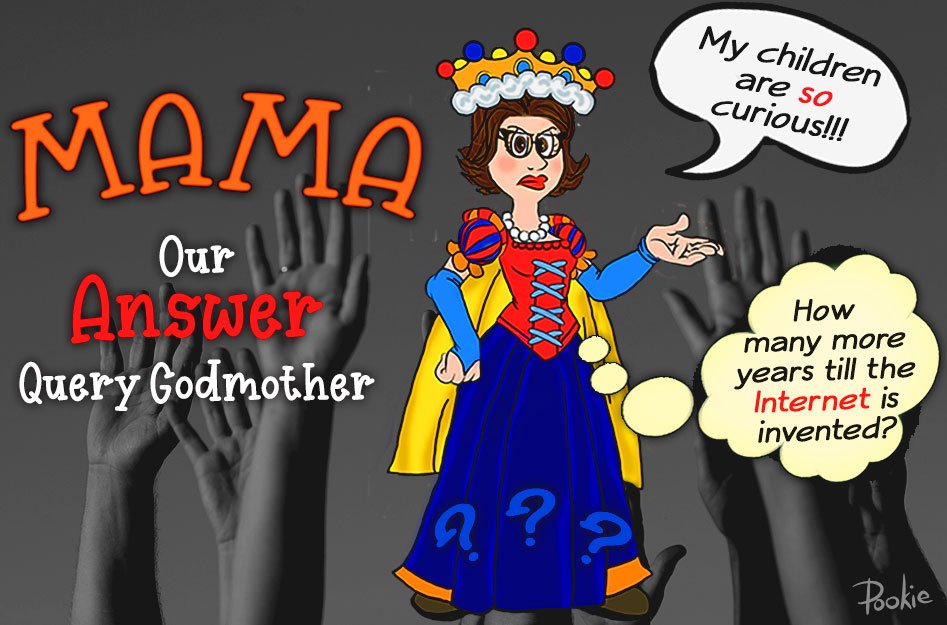 I constantly bombarded my poor Mama with these questions as if she had the magic answer to miraculously cure my friends’ afflictions.

I also wanted to know if they had done something to cause their mishaps and if they had, I wanted to make sure that I never did that “something.” 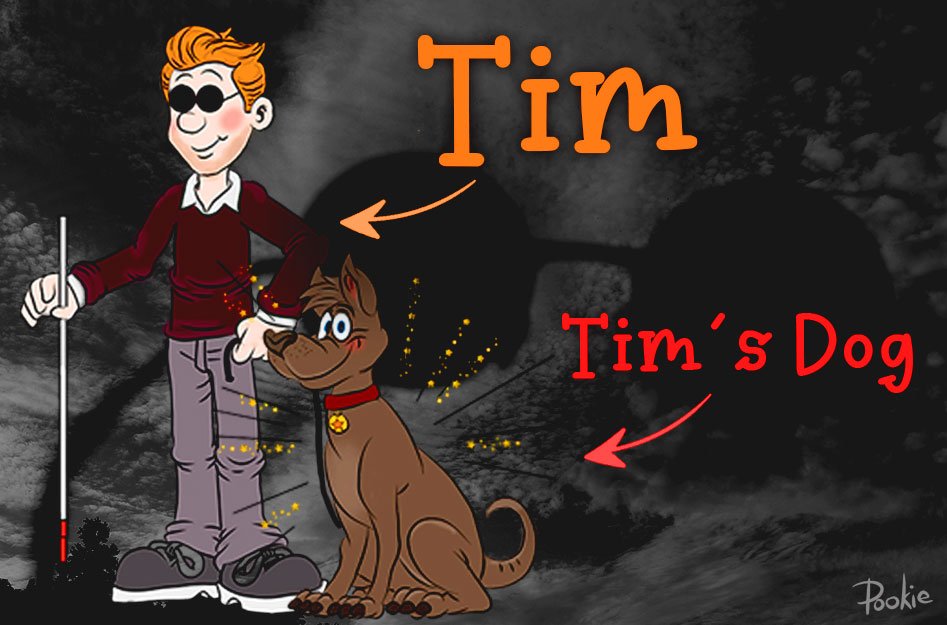 One day we had a blind man named Tim visit from our church. He wore sunglasses, carried a white cane and had a big dog that walked along beside him. I had never been around a blind person before.

It really made me mad because Mama never let us bring our dog Spotty into the house and she allowed this man to bring his goliath animal in with him with no questions asked. 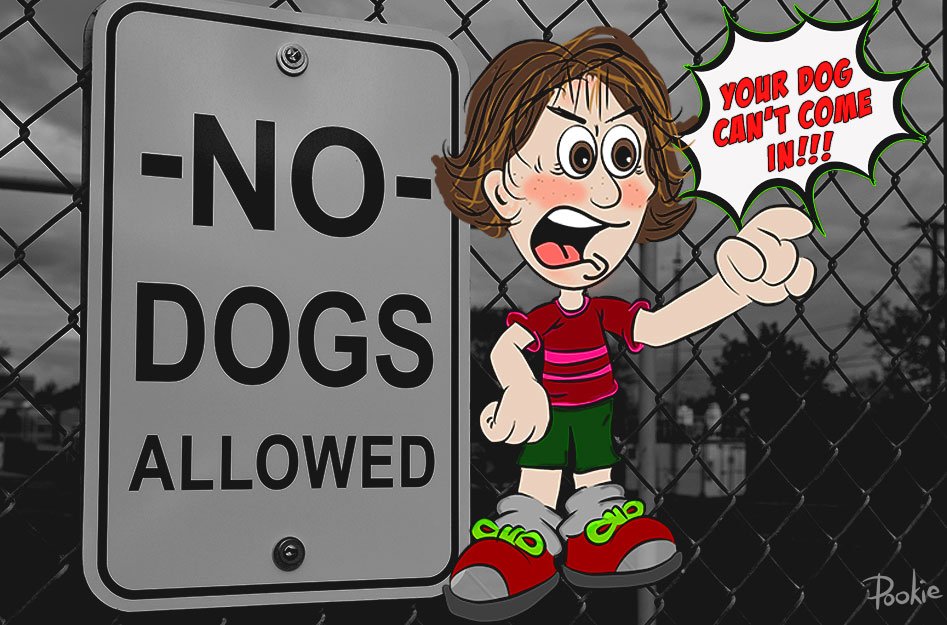 “We don’t allow pets in our house,” I blurted out.

My mother gave me her “Mother Look” that abruptly shut me up.

“It’s all right Pookie. Tim’s dog helps him to see,” she sweetly answered as she gave me her best evil eye. 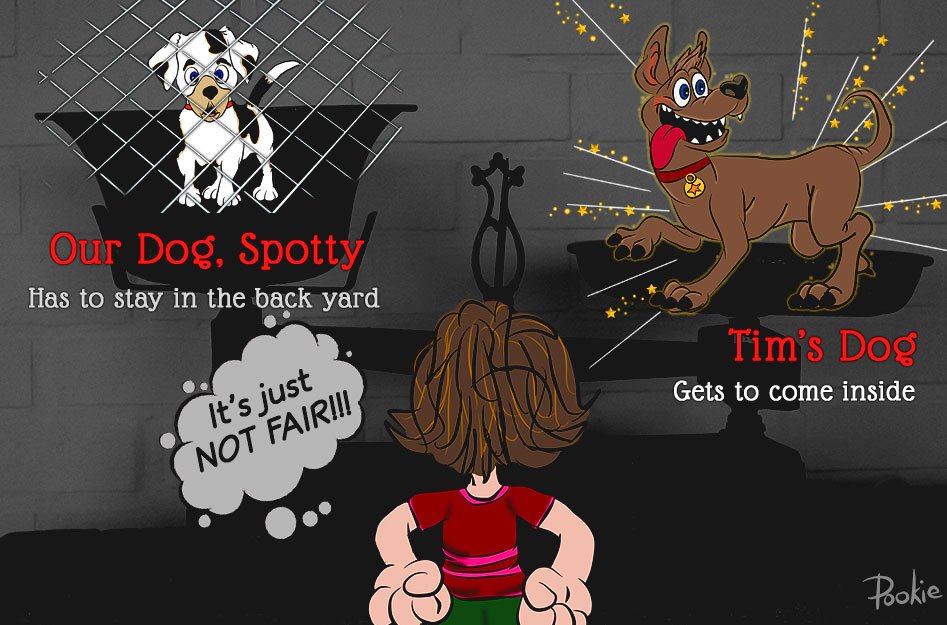 I examined the dog and Tim very closely as the adults talked. I tried my best to look behind Tim’s glasses to see if he had no eyes, or if he just couldn’t open his eyes or what. My mother went into the kitchen to get coffee for our guest and I was left alone in the room with him. 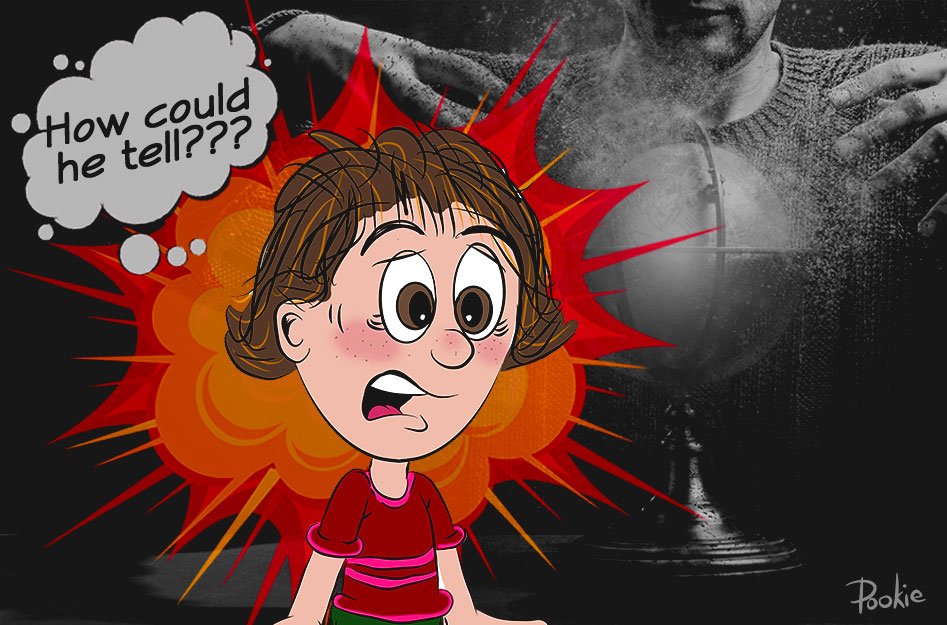 How did he know I was staring at him?

“Is there something you want to ask me?” he continued. 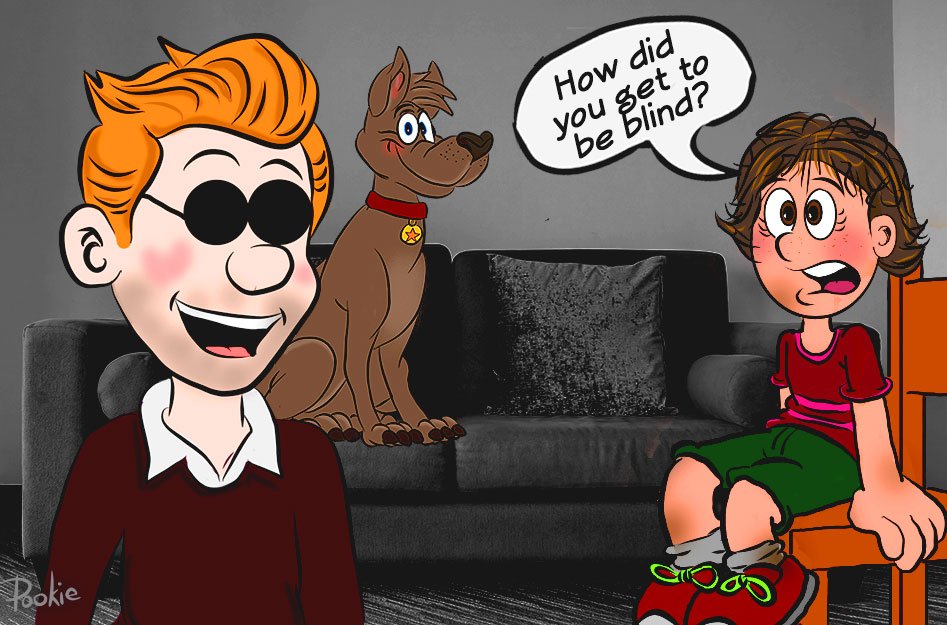 I figured that I better get my curiosity resolved before my mother came back in and shut me up. 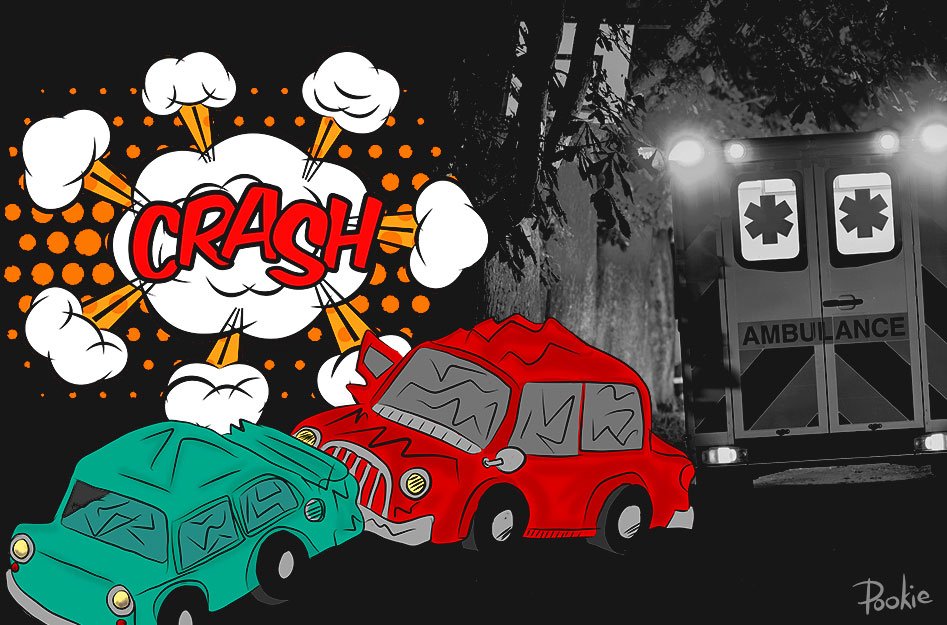 Tim chuckled. “Well,” he explained, ”I was in a car accident about five years ago. A heavy part of the car landed on my head and cut it. The heavy blow to my head caused me to lose my sight.”

My mother entered the room with the coffee. I wanted to hang around longer and hear more about the terrible accident but the doorbell rang, more church people arrived and I was shuffled outside to get out of the way. 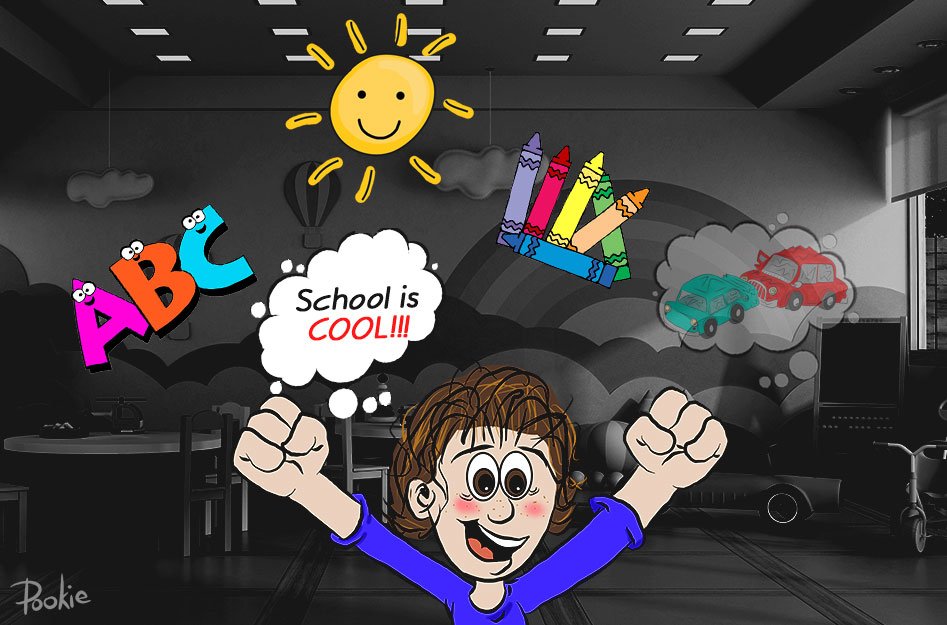 Tim’s story stayed fresh on my mind and for two weeks I constantly worried with imaginations of accidents and bloody heads.

Finally, I was able to put those figments out of my mind as other pre-school troubles replaced thoughts of Tim and his dog. 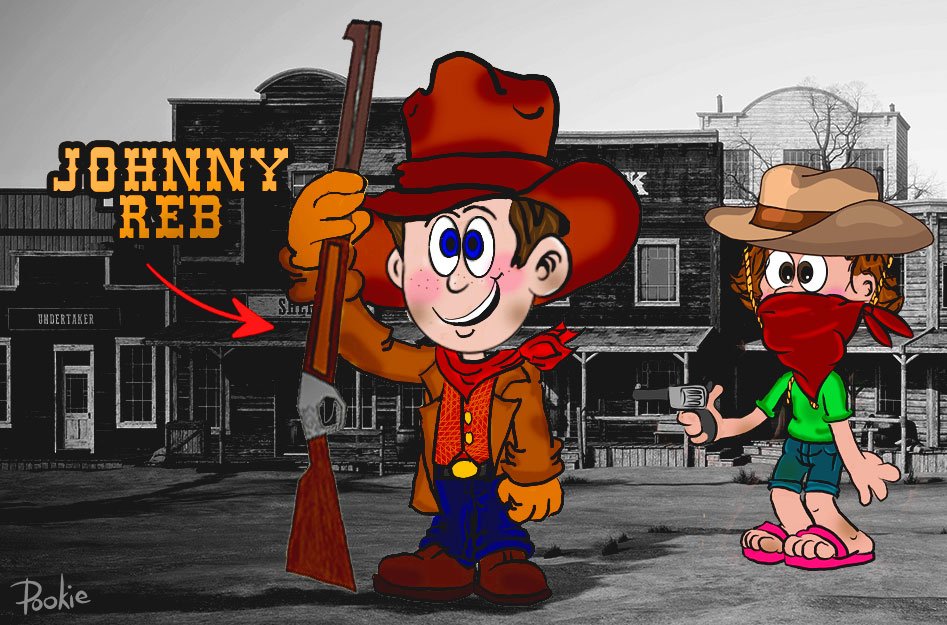 Late one Wednesday afternoon Dub and I were playing in the back yard. He had his Johnny Reb plastic rifle and wanted to play cowboys.

He wanted me to be the bad guy first and then he would in turn let me be Johnny Reb.

Now, I was the big sister and I was used to giving the orders but I reluctantly gave in and let him be “good guy” first. 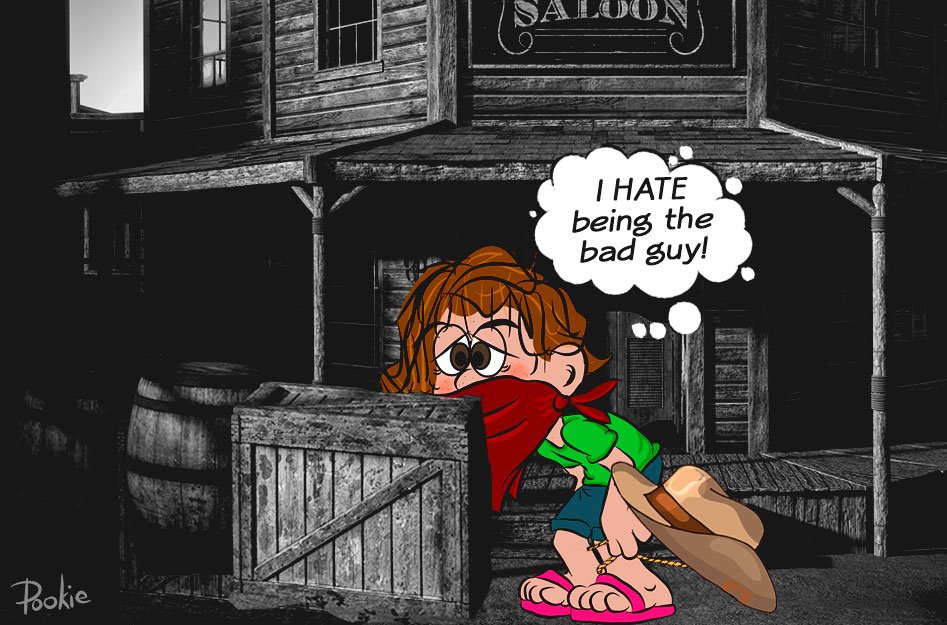 I really didn’t try to be that “bad” and hid in a conspicuous place so that he could easily find me.  After about three minutes of playing I announced that it was my turn to be Johnny Reb. 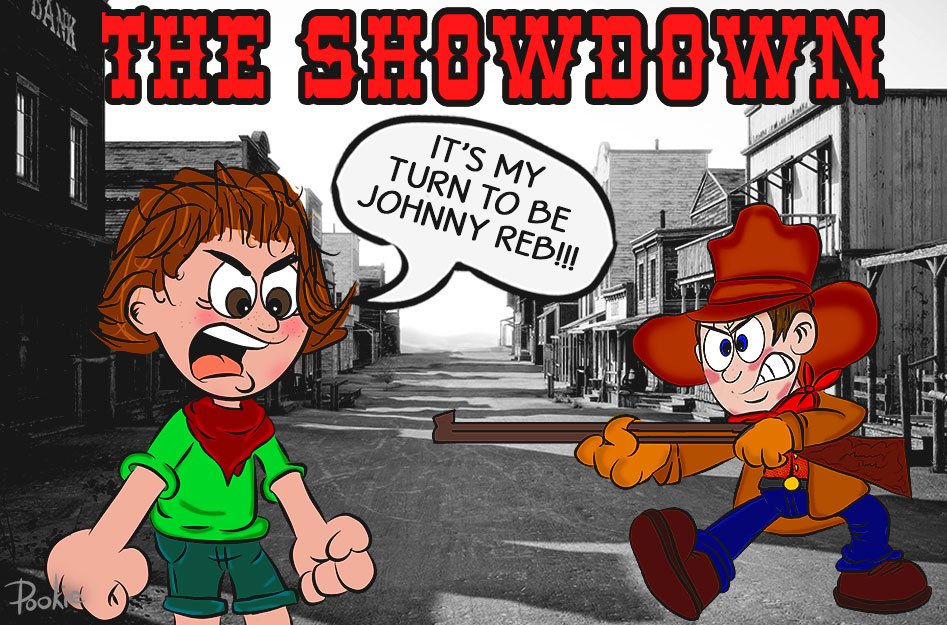 He exploded and started to whine about how it wasn’t fair and that I wasn’t going to get his gun.

I grabbed the end of the barrel and yanked. He managed to hold on tight and jerked the prize from me. 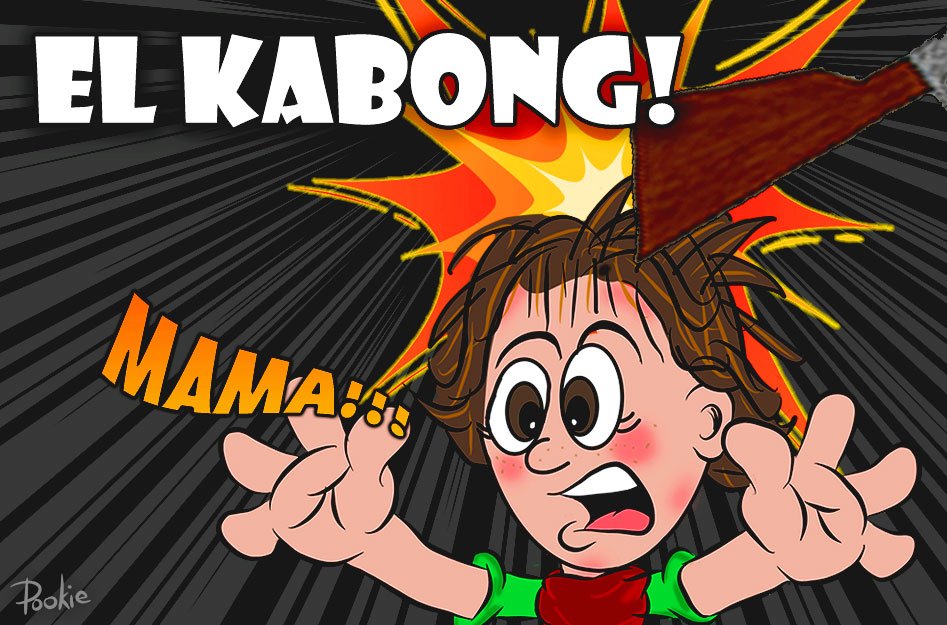 I pushed him and the tit-for-tat continued until he gave me an “el-kabong” with the rifle on top of my head.

I yelped and ran in to tell Mama.

She made us both go to our room and lay down. 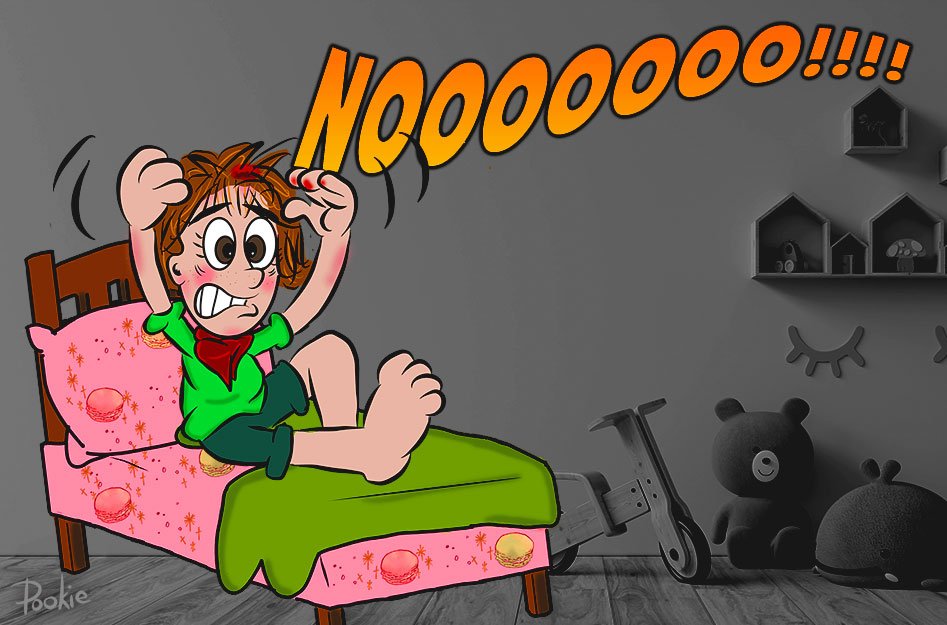 As I lay there in by bed I wiped my tear-stained cheeks and tried to catch my breath. The crown of my head pounded with pain where the Johnny Reb had found its target. I put my fingers on the lump that had emerged and sobbed again. I then noticed that there was an icky goo on my fingertips. I sat up and examined my hands. They were red with blood. 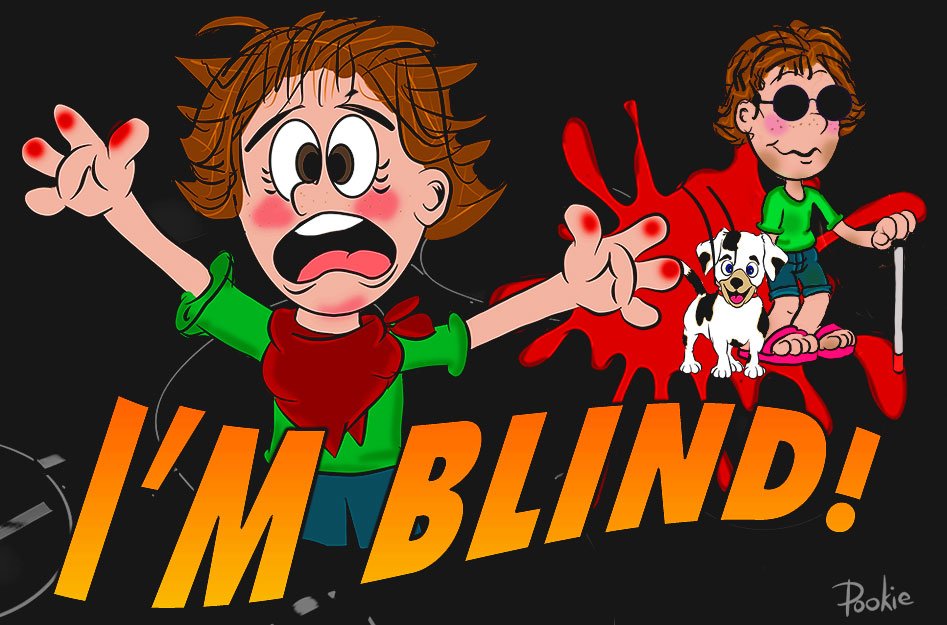 Immediately I thought of Tim and knew what my fate was to be. I raced to find my mother screaming, “I’m blind. I’m blind….Dub made me blind.”

Mama checked my wound, washed it off and assured me that I would not lose my sight.

She explained that Tim’s accident was much worse than this and that my head might be sore for a day or two but it would eventually heal. She then marched into Dub’s room and took Johnny Reb away from him.  I think I heard her say he was grounded from all his cowboy stuff and ice cream for the next month.

I gloated amidst my tears and pain. I love ice cream. 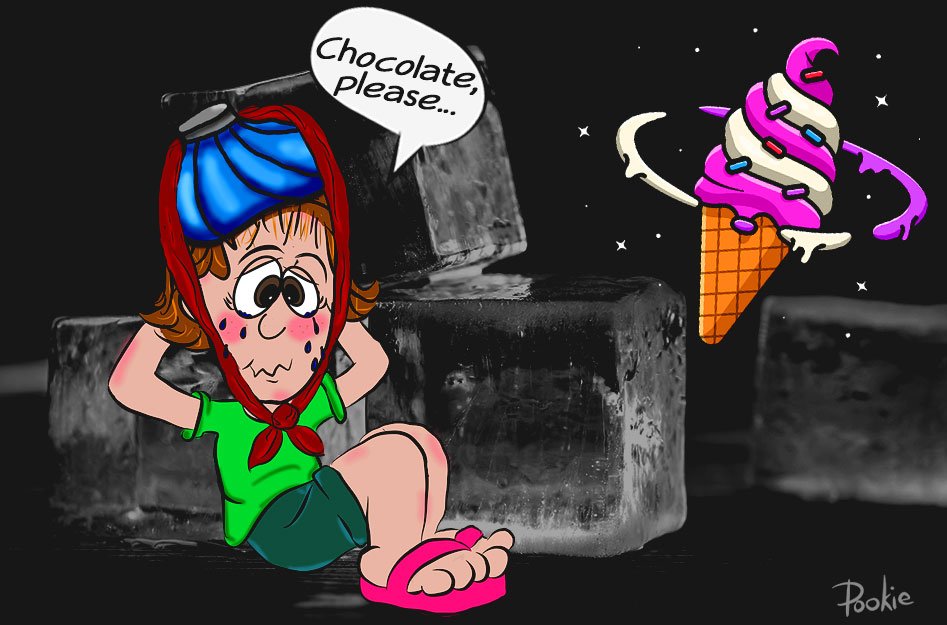 Mama fixed me a special sack with ice in it and told me to keep it on my head. 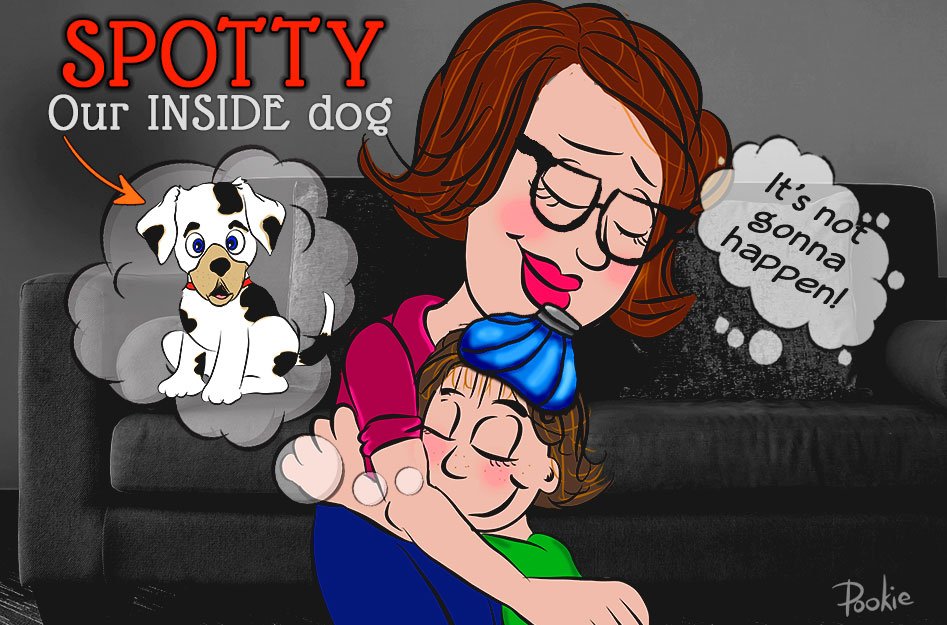 As she hugged me to soothe, as only a mother can, I looked up at her and asked,

“I don’t think so, “ she smiled and kissed my aching head. 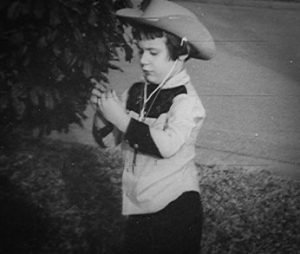 That was a great reflection -as for my Juvenile Rheumatoid Arthritis, my mom told me about 5 yr ago that the diagnosis took 7 yr to be official! The dr. kept beating around the bush about calling what I had, arthritis…there wasn’t enough other patients to compare me to. Mom called it arthritis way before they did. They first thought, Scarlet Fever, then Hmmm not Leukemia, not polio, let’s see she presents like an old arthritic woman, can’t be that…
As for the best description to a little kid looking me up, & down asking, “What’s wrong with you?”, I’ve adopted the answer one dad had for his kids inquiry,”Kathleen was very sick as a baby, & her mom prayed she wouldn’t be taken to heaven, but live here on earth, Jesus said ok, but there will be a scarred body to remind you, are you Ok with that? Her mom said we all can live with that; so she has, & aren’t we happy about that choice?!”
Again, about 5 years ago my mom announced she needed my forgiveness…
Me: what do you need forgiveness from me for?
Mom: I prayed you’d have Arthritis.
Me: can you expand on that mom?
Mom: when the dr said it might be a whole list of diseases that you’d die from, then they threw in Juvenile Rheumatoid Arthritis but that I wouldn’t die from that…so I prayed that you’d have that.
Me: Mom you had a child that may die & you heard of a disease that wouldn’t cause death, of course you’d pray that would be it-you don’t need forgiveness for being a loving mom-go in peace-your prayers were answered.
she said she felt better, since that thought burdened her lately.
Thanks for being a good childhood friend…no doubt you were the answer to her prayers too.

Even if it’s only a dollar , throwing some money our way can really help pay online expenses, or if you just want to buy usa cup of coffee, a one time donation is available. And, we do love coffee. 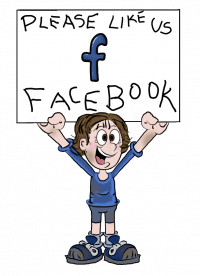 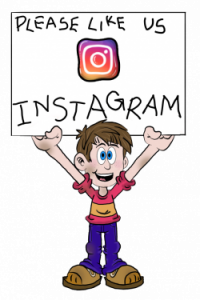